The Importance Of Uniform | On the Mat Martial Arts

The Importance Of Uniform

The Importance of Uniforms 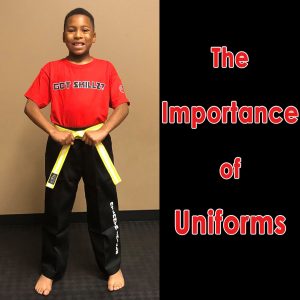 No matter what type, uniforms give people a sense of unity and helps promote pride in being a part of a larger organization. Loyalty in a group also increases and a feeling of team boosts the morale among everyone involved. Members also feel more confident and enthusiastic because they belong to a group that has the same interests and goals. In the greater scope of things, this cohesiveness also creates brand recognition and consumer trust within the community.

In martial arts, wearing a uniform is an important custom and each style has their own traditional attire that represents it. These uniforms are worn in class for training as well as at formal events such as testings, tournaments, and demonstrations.When people are seen in a traditional martial arts uniform, it is recognized that they are a part of some form of the art. There is a sense of unity in their own individual style, but they also feel a sense of belonging to the martial arts world as a whole.

And while tradition is important regarding martial arts uniforms, it is a challenge to keep them looking their best when they are worn daily in class. For this reason, SKILLZ martial arts schools offer a supplemental uniform. This pants and t-shirt combinationis comfortable as well as functional. This is especially important since SKILLZ drills consist of physical training that involves floor exercises and martial arts movements. It also provides students and parents the flexibility of having options for training.

Much like the military, students wear this training-type uniform in class daily. By wearing this class uniform the students cankeep their formal, traditional uniforms in tip top condition for official events. Even better is that the t-shirt for this class uniform is specific to each age group so it creates unity among them. And since the SKILLZ ninja is displayed each shirt, this keeps all students in the world-wide SKILLZ organizationconnected.

Uniforms are a great way to create a union among people in an organization and create a consistent appearance. When traditional martial arts uniforms are thought of as a “dress uniform” and are to be worn for special events, it creates a higher sense of appreciation for it. Utilizing a training uniform or “fatigues,” on a daily basis, is a more practical approach, especially in children’s martial arts classes. Having uniforms that are durable, as another option for training time, is a great alternative for students and parents appreciate the simplicity that comes with this.